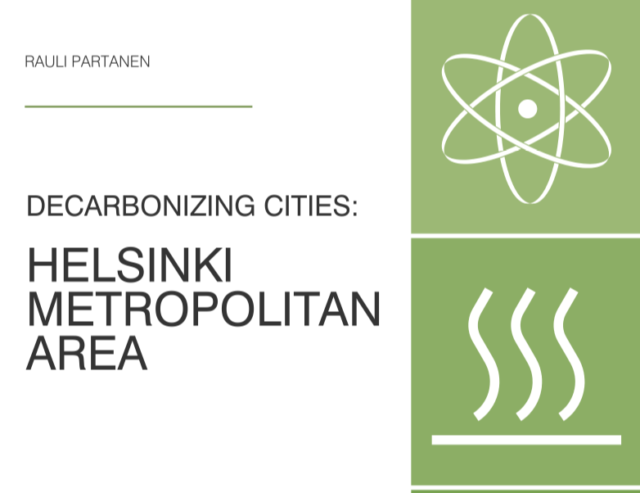 Electricity only accounts for roughly a third of our energy related emissions. Industrial processes, space heating and hot water use, along with liquid fuels for transportation make up most of the rest of our energy demand. This energy use needs also to be decarbonized by mid-century, either by electrifying it (and producing that electricity cleanly) or by replacing burning of fuels with other means.

This study presents a scenario in which small, advanced nuclear reactors are used to achieve a relatively cost-effective deep decarbonization of district heating, electricity, and transportation fuels in a city of roughly 1.5 million inhabitants. The used energy is divided as follows: 8 TWh for heat, 12 TWh for electricity, and 4 TWh for hydrogen production every year.

· Upcoming small, advanced nuclear reactors can offer a cost-effective and reliable source of low-carbon heat and electricity for various uses, such as cities with district heating networks.

· Small, high-temperature reactors can be used to produce affordable hydrogen with High Temperature Steam Electrolysis (HTSE). This can be done as part of seasonal load following of energy demand.

· Affordable hydrogen can be used to decarbonize transportation fuels by making synfuels from it, and other chemicals that use hydrogen (such as ammonia for nitrogen fertilizer).

· The annual energy use of 8 TWh of heat, 12 TWh of electricity and 4 TWh of hydrogen can be produced with roughly 4 GWth of high-temperature thermal nuclear capacity, or roughly ten small, advanced nuclear reactors with a thermal capacity of 400 MW each.