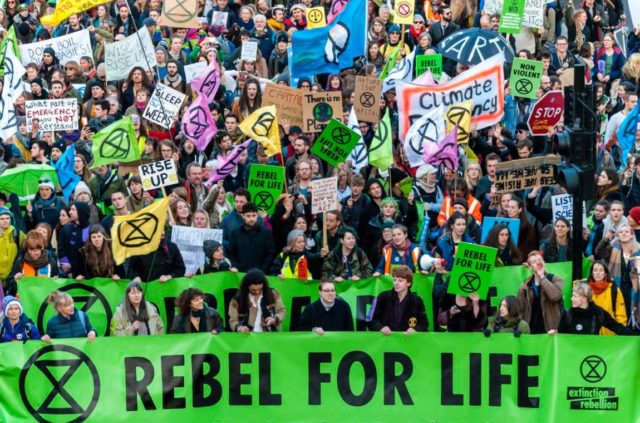 This piece by Alison Baker, Founder, Ally Bee Knitwear & Co-founder of In The Drink UK, on the company’s website discusses why her company supports the Extinction Rebellion movement, and cites Kirsty Gogan‘s (of EFH and LucidCatalyst) comments at the annual Energy Live Expo in London.

“If we continue to just ‘do our bit’ for the environment we are going to hell in a handcart, Extinction Rebellion spokesperson, Adam Woodhall warned the energy industry yesterday.

Speaking on the keynote panel at the annual Energy Live Expo in London, Woodhall said the failure of the ‘do your bit’ narrative of industry to stop a rise in global  emissions made the Extinction Rebellion movement a logical next step to harness societal and governmental change.  Fellow panelists – all experts and veterans in the energy sector – agreed. The shared consensus across the panel was that there is legitimacy in Extinction Rebellion’s non-violent civil disobedience campaigns given the desperately precarious trajectory we are on heading to 1.5°C+ global warming…

The burgeoning Extinction Rebellion movement does not put forward a definitive range of preferred options for mitigating against climate heating, instead it advocates the tough decisions be put to the people for decision making. Woodhall’s fellow panelist, Kirsty Gogan of Energy for Humanity, agreed with XR’s emphasis on the importance of citizen’s juries, or citizen’s assemblies. She said when you bring together a representative demographic and give them a deeper understanding of technical issues they tend to arrive at the same conclusions as experts – whether it be climate change or abortion. Yet unlike options presented by experts, informed citizens’ decision making on tough issues has an accepted public mandate. Rapid decarbonisation demands uptake of the range of available technology, one of which is nuclear, a widespread taboo subject which she argues must be looked at again, and citizen’s assemblies are a platform to delve into this prickly subject…”