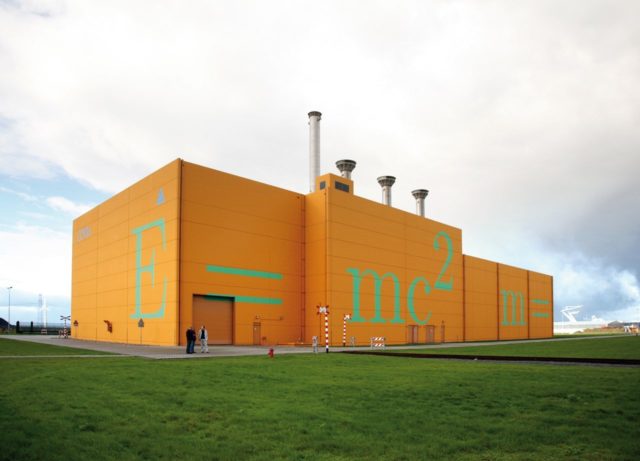 Nuclear power is very low carbon and one of the safest energy sources ever. But what about the waste?

There’s so much fake news and myth-making around nuclear waste that it’s totally fair to be worried about it. Like everyone else we also assumed it was a big problem, but here’s the top 6 reasons reasons we changed our mind and have even grown to love the stuff.

1. There’s hardly any of it

If you took all of the nuclear waste created by all the nuclear power plants in the whole of the USA and stacked it on one football field it would only stack to a height of around 9 metres. A large coal plant creates a similar amount of waste every hour!

Nuclear waste doesn’t look anything like it does on The Simpsons. It’s a solid when it goes into the reactor and when it comes out. It’s arranged as a series of metal rods that contain ceramic uranium pellets inside.

3. It can be used again as fuel

Waste from today’s reactors can be recycled as fuel for the next generation of reactors. These advanced reactors – known as “fast reactors” – operate on a closed fuel cycle meaning they can get around 100 times more energy out of what’s currently considered waste. The tiny amount of waste left over what today’s fast reactors can’t use has a much shorter half-life of centuries rather than millennia. Twenty of these reactors are already in operation with more coming soon.

Using fast reactors the UK has enough nuclear “waste” to power the entire country for… 500 years! In the USA, that football field’s worth of spent fuel could power the states for 1,000 years! All without mining another piece of uranium. So it’s time to stop thinking about it as “waste” at all. In reality it’s the ultimate low-carbon energy solution for our future and current needs.

Nuclear is the only power source that completely contains its waste products and carefully looks after them. Most spent fuel rods end up contained in big concrete containers on land. By comparison, burning fossil fuels – which provides 84% of the world’s energy – directly sends toxic waste into the environment. As a result an estimated 7 million people die from air pollution ever year. Even renewables don’t always reliably contain their waste; a large amount of solar panels and wind turbines end up in landfill and can even pollute our soil with toxic metals.

6. Terrorists can’t do much with it

Ever heard someone warn that terrorists will use nuclear waste in some crazy dirty bomb? Yep, we heard that too. In reality the only terrorist attack EVER to take place on a nuclear power plant was actually by a Green Party politician who fired 5 rocket-propelled grenades at an unfinished power plant in 1982. Nothing much happened. So why haven’t other terrorists bothered with it? Because, contrary to public perception, nuclear waste isn’t explosive. If you wanted to use it for a bomb you’d need a crane capable of lifting a 100-ton canister of spent fuel rods, an 18 wheel truck to transport it and an enormous government regulated reprocessing facility to extract anything bomb-worthy from it.

Reasons to be cheerful
And finally, some have argued that the risk of societal collapse from extreme global heating makes nuclear waste an unacceptable risk. In reality you need both highly advanced industrial infrastructure, lots of time and lots of money to reprocess nuclear waste into anything actually dangerous. A Mad Max style dystopia simply couldn’t handle it .
If you’re truly worried about the risk of societal collapse then your best bet is to campaign for nuclear power. Not only is it our best bet to decarbonise our energy supply and solve the climate crisis, but more investment in fast reactors is the best way of eliminating the waste we currently have today. With enough political will and a commitment to measured evidence-backed decision making, future generations will find it totally perplexing that we ever worried about nuclear “waste” in the first place.