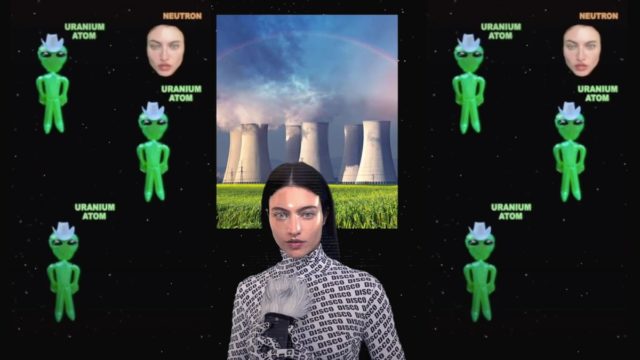 It’s not what you say, it’s the way that you say it.

Pro-nuclear environmentalists have been mulling over this adage for quite some time. How do you communicate the truth about nuclear power? Go heavy on the science? Aim for consensus and go in soft? Declare all out war on Greenpeace and blame the traditional greens?

Nuclear physics, understandably, hasn’t had much of an outing yet on TikTok – the land of the 60 second video. But Isabelle Boemeke, a 30 year model from Brazil who goes by the stage name Isodope, is making up for lost time.

Across her social media platforms Boemeke has created a whole new genre of pro-nuclear activism that uses short videos to deliver fast facts in a visually unique way. She can now proudly claim her title as the world’s first nuclear influencer. We hope she won’t be the last.

In her cosmically vapourwavey videos Boemeke takes the instagram influencer style and explodes it into a glitchy Windows 95 sci-fi phenomenon. Where normally you find obsessive skincare routines and paid product placements, Boemeke drops in a campaign to save Diablo Canyon, a lesson on the energy density of uranium and a satire on the intermittency of wind turbines.

Not only is Boemeke reaching a whole new audience, she’s also subverting the detached vapidity that pervades the blurry moral space of influencer culture. Whilst some influencers accept money to promote burning gas at home, Boemeke is extolling the climate saving virtues of low carbon energy one crazy video at a time – no matter the controversy she might cause.

Mobilising A New Base

But Isodope is more than just an educational exercise. Boemeke is beginning to mobilise a new base into action. A recent series of typically surreal TikTok videos build on her campaign to save Diablo Canyon and then direct her followers to sign a petition directed at the state governor.

On her YouTube channel she’s also interviewing other activists, reflecting on the links between high energy lifestyles and women’s rights and telling her own personal story to help inspire others to action. All this helps develop Isodope into its own microcosm; a world of vintage futurism in which the most complex of problems can be met with a high saturation blend of idealism and pragmatism.

The Start of Nuclear’s New Wave?

With the climate crisis worsening and a whole new generation of activists taking centre stage, the old prejudices against nuclear are seeming less and less relevant. One of Boemeke’s greatest strengths is her ability to transcend above the old cantankerous debate between anti-nukes and pro-nukes and just say it how it is. This is something we at Energy for Humanity are hoping to do more and more as we develop more public facing nuclear activism.

In a year that saw the artic on fire, the pressing reality of the climate emergency provides space for new voices like Boemeke to speak with clarity and directness about the need to get real on a low carbon future. Detractors make way: nuclear’s radical new wave has begun.