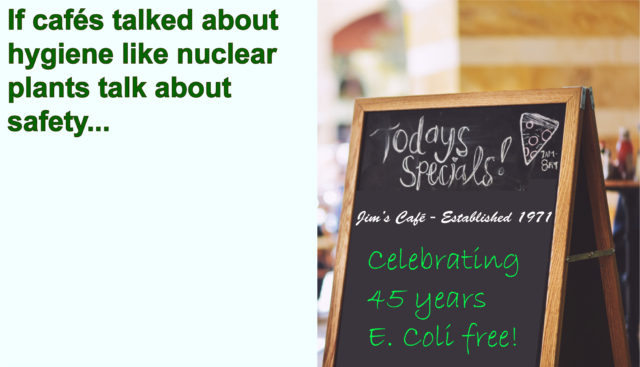 Why is it that nuclear energy, humanity’s safest source of energy, is perceived as uniquely risky? As Professor Malcolm Grimston, Senior Research Fellow at Imperial College London, recently argued in a lively presentation, too much information could be hurting nuclear energy’s reputation for safety, and may even cause harmful paranoia about radiation.

Professor Grimston’s fascinating talk ranges widely, from differing attitudes to supposed “good” and “bad” radiation, to public rationality, to the appeal of radioactive health spas. (Surprisingly, such radium spas are popular in Germany, the home of anti-nuclear hysteria.)

Debates about safety and risk touch us as human beings to an extent that more technical debates about, for example, capacity factors, do not. Hazard perception depends on our personal attitude to risk, and what we have learned about the probability of the risk, the magnitude of the hazard and the nature of the dangers involved.

Many of us have no direct connection to, or specialist knowledge of, technological industries and are left to judge their safety based largely on what we are told by our governments and the industries themselves. However, as Professor Grimston suggests, our perception of an industry’s safety could be related to the volume of information we hear about its safety record.

This is particularly challenging where there is no mandatory baseline of information to allow easy comparison between different energy sources. In other industries disclosure is predominantly voluntary; and dangerous industries such as coal don’t talk much about safety because coal contributes to the deaths and ill-health of so many people.

Many safe industries choose not to emphasise their safety record because they know that safety is not an alluring Unique Selling Point: safety is simply an expected default. For example, would you eat at a café that trumpeted the proud slogan, “Celebrating 45 years E. Coli free!”? Or go on a fairground ride with a neon sign that said “No major incidents since 1996” at the entrance? Now, the two statements above might convey positive facts – the café might have opened in 1971 and the fairground ride might be just twenty years old, marking a 100% safe track record – but would being told the information above in isolation make you feel safer?

The public surely has the right to know about the safety of industrial plants, and industries should respond to public opinion. But safe industries such as nuclear energy could be caught in a Catch-22: wishing to uphold the public’s right to know, the nuclear industry communicates its safety record openly; however, because other, much more dangerous industries are able to escape safety disclosure, the nuclear industry’s very act of discussing safety could make people think that it isn’t safe. This paradox has implications for human health, development, and the environment.

People in the nuclear industry have a very difficult job. Through stringent, careful procedures the nuclear industry has delivered the safest large-scale energy industry the world has ever seen. Nuclear people are rightly proud of their safety record and try their best to provide as much information as possible in order to inform the public about the safety of nuclear facilities. But public opinion suffers from the present difficulty of making a meaningful comparison between different industries. In the case of the energy debate what is missing is a single, authoritative and independent source of information that allows people to easily compare the safety of different energy sources. Were such an index available we would see, for example, that pollution from fossil fuels contributes to 5.5 million premature deaths per year, whereas not a single person has been killed by the radiation released by the Fukushima accident.

We hope you enjoy Professor Grimston’s talk, and look forward to working on ways out of the impasse in the months ahead.