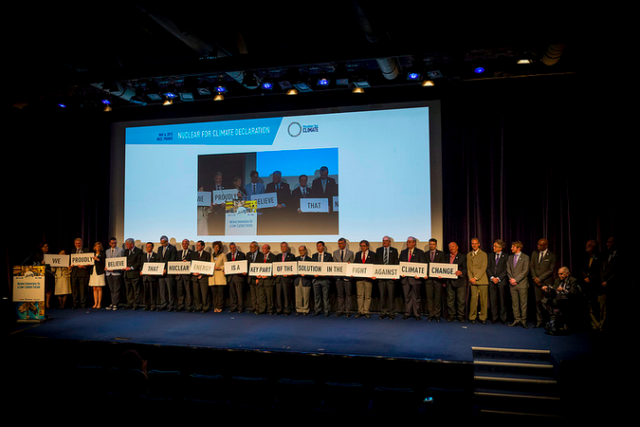 “It is ironic that environmentalists remain united in their opposition to the single technology that might just save the planet.” Robert Stone

In an emotional ceremony, 39 societies representing 50,000 nuclear scientists from 36 countries across all five continents have joined forces to fight against climate change.

The joint statement, published on Tuesday May 5th, calls on the UNFCCC (United Nations Framework Convention on Climate Change) Protocols to recognize nuclear energy as a low-carbon energy option, and to include it in its climate funding mechanisms, as is the case for all other low-carbon energy sources.

The Intergovernmental Panel on Climate Change 2014 report on energy and carbon mitigation, the United Nations Sustainable Development Solutions network ‘Pathway’s to Decarbonisation’ study, and also the International Energy Agency,  have all concluded that a massive expansion of nuclear energy is critical if we are serious about transitioning from fossil fuels.

This won’t happen if environmentalists get their way.

Green NGOs are ideologically opposed to nuclear and are determined to block it from playing a part in the fight against climate change. For example, Climate Action Network (CAN), the world’s largest network of civil society organizations working together to promote government action to address the climate crisis, with more than 900 members in over 100 countries will insist that the 2015 Paris Climate COP21 agreement MUST NOT allow any attempts to incentivize nuclear power in any way.

Green NGOs will insist that nuclear power MUST NOT:

Similarly, the formulation of the UN’s Sustainable Development Goals, to be decided in September, so far ignores the role of nuclear as the leading source of zero carbon power. The draft targets on energy include:

“7.a By 2030, enhance international cooperation to facilitate access to clean energy research and technology, including renewable energy, energy efficiency and advanced and cleaner fossil-fuel technology, and promote investment in energy infrastructure and clean energy technology.”

While clean energy research could in theory include nuclear, only renewables, efficiency, and even cleaner fossil fuels are mentioned. This suggests that the process of defining the SDGs has yet to take into account evidence from experts including the UN’s own scientific advisors on climate and energy. As repeatedly outlined by Energy for Humanity, the case against nuclear is often overstated (especially when compared with real and present dangers from coal and oil) while its potential is overlooked.

The outstanding declaration by 39 nuclear science societies is a major component of the “Nuclear for Climate” global initiative, which launched in the summer of 2014. This is a grass-roots initiative by scientists and engineers that seeks to overcome misinformation around nuclear and gain acknowledgement that nuclear is a leading low-carbon energy, and as such a vital part of the solution to fight climate change.

Environmental NGOs, deeply entrenched in an anti-nuclear stance dating back to the 1970s, have become seemingly adept at influencing the agenda. This includes their ability to influence impenetrable jargon found in official documents governing UN policy. Yet this policy matters. It sets the framing for investment on a massive scale, and is critical to the international fight against climate change.

At this stage both in the formulation of policy and in light of the ever greater urgency surrounding the need for rapid decarbonisation, the failure of the green agenda to accept the evidence on nuclear will be literally catastrophic. This is not a zero-sum game where it’s nuclear vs. renewables. It is about recognising the real need for every viable solution in order to meet the challenge of decarbonisation.

If advanced reactors can be deployed safely, securely, rapidly and at scale, alongside renewable energy and increased use of energy conservation measures, the UN has a chance of meeting it’s goals. The policy frameworks in their currently proposed form undermine this potential and therefore risk that the targets cannot be met. But, as the scientists this week make clear, in impassioned terms, a pro-nuclear environmental agenda could help to ensure the world will be a richer, more equitable place, less vulnerable to catastrophic climate change.