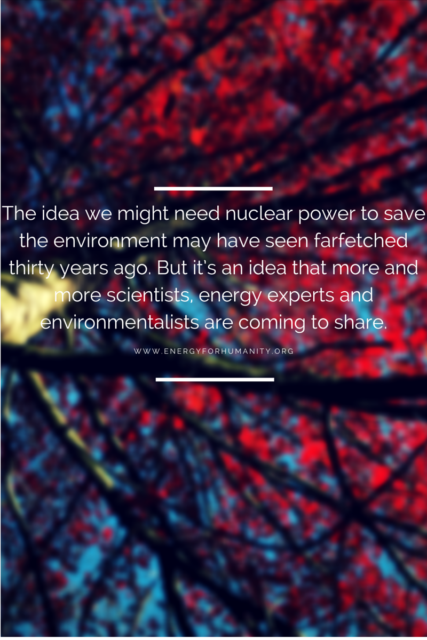 The idea we might need nuclear power to save the environment may have seen farfetched thirty years ago, at the height of the anti-nuclear movement. But it’s an idea that more and more scientists of all stripes as well as energy experts and even environmentalists are coming to share.

Last month, 75 biodiversity scientists signed an open letter imploring the environmental and conservation communities to rethink “idealistic” opposition to nuclear energy, given the threats to global ecosystems set in motion by climate change. This open letter follows in the wake of another published a year ago in the New York Times by climate scientists with a similar message: “there is no credible path to climate stabilization that does not include a substantial role for nuclear power.”

These scientists who study the earth and the life on it are concerned it is too risky to rely solely on wind, solar and other so-called “green” power to replace fossil fuels, which are still the fastest growing energy sources by a long shot. As these scientists point out, renewable power sources would require enormous amounts of land, materials, and money to meet the world’s current and growing energy needs.

Wind and solar power are especially problematic because they are intermittent and can’t be dispatched to match demand. While the quest is on for grid storage options, there has not yet been a significant storage breakthrough, and any contribution it ends up making may only be modest.

In the meantime other power sources that can run full time are required to take up the slack. Options for doing so are limited to fossil fuels, biomass that is comparatively bulky and limited in scale, hydro power that is largely tapped out in some places, and nuclear power. The advantage of nuclear power is there is no shortage of suitable sites and it is the most low-footprint form of power generation, taking into account land use, materials, carbon footprint, and fuel density.

History has shown the most effective way to replace fossil fuel power over a 15-year-period is to build up nuclear. Ontarians, who rely on nuclear plants to deliver roughly three-fifths of our power every day, and have become coal-free, know this. So do people in France, where nuclear energy supplies around three quarters of power needs.

The problem is that as a complex form of technology, nuclear plants are relatively pricey to build. Few have been constructed of late in the Western world, during an era of cheap coal and gas, liberalized energy markets, cash-strapped governments, and hyped-up renewables. Experienced work forces who can put them up quickly have become hard to assemble on the fly.

These patterns can alter, though, as people come to recognize that once nuclear plants are up they can churn out steady carbon-free power for over half a century. Moreover the power they provide is typically quite cheap and not sensitive to fuel price volatility.

What about safety? The accident at Fukushima after the Japanese tsunami in 2011 has gripped the world. Yet no one has died from radiation released, and the World Health Organization anticipates no uptick in associated deaths will occur.

By contrast, a million people die every year of health problems caused by the pollution from coal. A dam break in China in 1971 killed over a hundred thousand people. Rare earth mining for materials used in solar panel construction, EV batteries and wind turbines is currently poisoning a chunk of inner Mongolia.

There is no absolutely risk-free, pollution free way to generate energy, as James Conca has pointed out in a well-circulated article in Forbes, How Deadly is Your Kilowatt. But over its lifetime, Conca points out, “Nuclear has the lowest deathprint” relative to the amount of energy it produces. Meanwhile, safer meltdown-proof reactors are currently being developed around the world.

Choosing to build more nuclear power plants is going to require a mental shift for a lot of people. In their letter, conservation scientists called for the environmental community to move beyond “idealistic perceptions of what is ‘green’” and think practically about trade-offs around energy. As the scientists suggest, no solution that’s currently visible can match nuclear’s steady, CO2-free power for keeping our world safe from biodiversity and climate impacts.

Suzanne Waldman is doing a PhD in Risk Communication at Carleton University. A linked and sourced version of this article can be found on her blog, pframing@weebly.com. 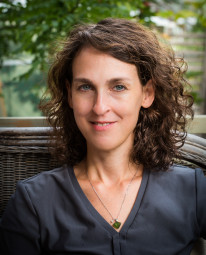